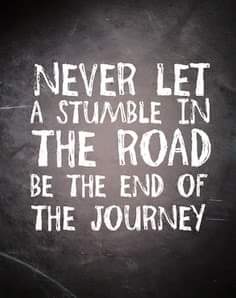 I don’t have to imagine those things. I lived them. I can remember so many times failure has stopped me from achieving things in my life. I remember not wanting to try new things because the fear of failure kept me frozen in time. A time when failure seemed to be my only option.

I was a prisoner of my own mind. Doubt and lack of confidence kept me from growing and experiencing life. Not to mention the fact that my addiction was feeding my fears and adding to my already low self esteem. I thought, that’s just who I am. I settled for less when I should have been striving for more.

I continued on this path for years. I remember many times wanting and wishing I could get clean. Only to dismiss the idea as impossible. I could never do it. I will die high. I will always use. That’s what I used to tell myself. I failed at staying clean many, many times. I began to think that recovery works, but not for me. I was about to give up trying after my 4th or 5th time. I almost disqualified myself yet again.

But something deep down inside me kept telling me to try again. Even when every fiber in my being told me that I could not do it. I had to figure out why I kept running back to using. What was I doing wrong. Then I realized that I wasn’t fully committed to staying clean. I had conditions on what I would and wouldn’t do. I had reservations and motives. I had excuses and alibis.

I was using the old lie once an addict always an addict as an excuse for not giving it my all. I became comfortable with stumbling (relapsing) and not getting back up. I once again settled for my failure as being who I am.

Once I was able to accept this. I was able to surrender and move past it. I was afforded another opportunity to get clean by the grace of my higher power. I was lucky to have made it back. I started to believe that I could say clean. I started to apply the suggestions that I wouldn’t take before. I decided that using drugs would not be the end of my journey.

My Journey is just beginning.