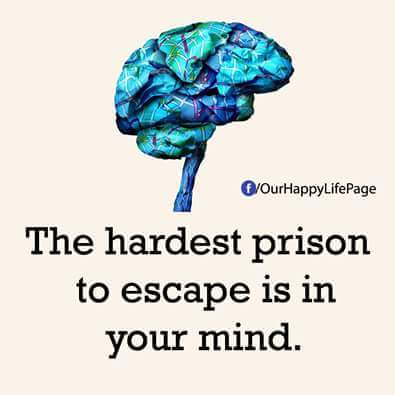 For many years, I held on tightly to the role of victim. I truly believed that everyone had it out for me and contributed to my failures. It was always someone else’s fault. It was a conspiracy, a set up or something or another. I wasn’t able to get honest with myself and take responsibility for my actions. I blamed my environment, my childhood, my parents, neighbors and even strangers.

Pointing ☝ the finger at anyone and everyone else was easier than admitting that I was to blame. Denial, justifications and rationalizations became my everyday norm. Little did I know that I was creating a monster, that I was creating a mental block, a fantasy land of lies and self deception. I was placing myself under arrest, locking myself up and throwing away the key. I became a imaginary cartoon character. Unable to fathom that I could possibly do anything wrong.

While I was in this state of deep denial, I used those excuses to commit offenses against the public at large. All the while feeling justified and believing that it was necessary at the time for my survival. Using drugs has a funny way of warping my thoughts and making them seem rational. The truth is now even without the use of drugs, my thoughts 💭 are often warped.

That’s where I am at today. Although I have been clean for 2 yrs, 7 mos and 29 days. My thoughts 💭 at times, are still like that of when I was using. I find myself suffering from delusional thought patterns, paranoid thought patterns and even the useless, hopeless and worthless thought patterns. It’s a struggle some days and others it’s not. More often than not I am in a good space, but I have been dealing with issues of not being grateful lately and I have shared openly with my sponsor and network about it.

I can be my worse enemy. I have a bad habit of being very critical of myself and allowing my past to have me believe that I will never be as good as I know I can be. I self sabotage and isolate myself from the same people that helped save my life. My Higher Power included. I had been feeling like this recently after being denied a job as a result of a background check. I immediately went into the pity potty mode and felt like giving up. The negativity was thick and I was caught up in the grips.

I am grateful that I do not have the urges or desires to hurt myself or others by using anymore. That is the farthest thing from my mind these days. After all, One thing I know for sure is my life is fuckin awesome right now. I will not trade it in for my old using life. No thanks. I will not think myself into trouble. I just had a couple of bad days that’s all. I am back to feeling great and I am back on my grind. Job searching, school work, meetings, family, and overall gratitude for the whole damn thing.

I just wanted to share that no matter what we go through.

This too shall pass.

3 thoughts on “BREAKING FREE FROM MY MENTAL PRISON”